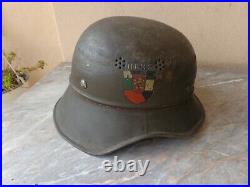 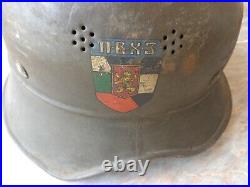 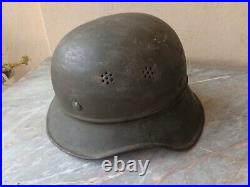 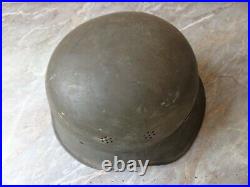 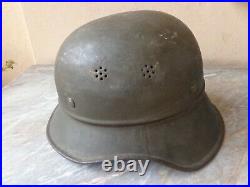 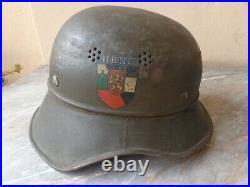 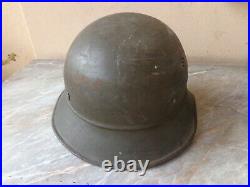 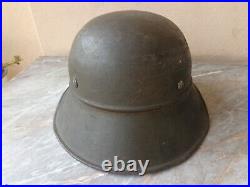 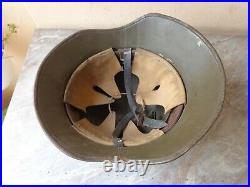 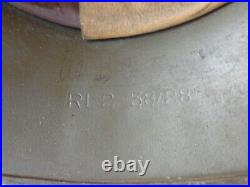 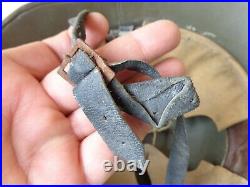 Helmet is of two piece construction, has two groups of seven ventilation holes to either side of the crown. There is a group of 3 holes at front, intended to bear Bulgarian royal police badges. Obviously later helmet changed destination troops. Shell retains its original grey paint (see condition on the pictures provided below) and rare perfect ORIGINAL DECAL! The decal represents a shield, the left part in the National colors /white-green-red/, the right part in black-white-black.

In the center of the shield there is a smaller red shield with a standing lion with crown inside. On the upper part in a dark blue line are 4 Cyrillic letters abbreviation of the Anti air corps name. Interior of the helmet has a three pad, WWI style, leather liner with each pad having two fingers. Helmet completes with blackened leather chinstraps.

The reverse interior neck guard is stamped with Germans producer's mark RL 2 38/28. Helmet in Rare Perfect condition! History notes: Formed in late 1932 the Deutsches Luftschutzverband, German Air Protection League, was a voluntary organization designed to provide Civil air raid protection in large civilian centers. Shortly after Hitler ascended to power the Deutsches Luftschutzverband was restructured and placed under the supervision of the Reichsluftfahrtministerium - National Air Ministry under the control of Hermann ring.

On April 29TH 1933 the Deutsches Luftschutzverband was renamed RLB, Reichs Luftschutz Bund - National Air Raid Protection League and was given the status of an official National organization tasked with all aspects of Civil Air Raid defense. The RLB remained a voluntary organization with a small personnel of paid, full-time uniformed officials to be in charge of the organization until June 1935 when obligatory service was introduced. Only the most basic uniform and equipment items were supplied to the personnel, with the rest having to be bought personally by members. On September 26TH 1938 a specific helmet for RLB personnel was introduced that incorporated a raised horizontal "bead" between the visors and crown.

These helmets commonly called the "Gladiator" style were supplemented with M35, M40 and M42 helmets that also incorporated a raised horizontal "bead" between the visors and crown. It hasn't been cleaned, it is in the condition in which it was found! This German helmet is a real find for any WWII. If you collect Helms or Helmets this one will be a very good addition into your Collection. Explore very well the attached pictures, which are part from the Description!

To view my Store , where you will find abundance of. New forged hand tools - as Axe heads, Hatchets, Adzes and other. All pictures are actual, you will receive what you see! If you are interested in more than one item, don't worry I will.

So don't pay, before I send you the invoice with the total amount. I will be very happy and grateful if you leave your. And 5 stars at all. After receiving your item, as.

Everything is OK and there are no problems. Communication is not the only, but the best solution. Thanks for shopping from us! This item is in the category "Collectibles\Militaria\WW II (1939-45)\Original Period Items\Germany\Personal, Field Gear". The seller is "thebestzico70" and is located in this country: BG.

This item can be shipped worldwide.