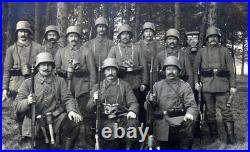 Very rare helmet in good condition see photo. Steel Helmet (Stahlhelm): The steel helmet was developed and introduced during the First World War when it became necessary to protect a fighter in trench warfare. The first model that has become a traditional symbol of German soldiers was the steel helmet M16 (Stahlhelm M16) - a helmet with oblique ear and neck protection, which was originally produced with a protruding visor, with frontal armor.

The characteristic horns at the top of this headgear served for protection and ventilation. The steel case of the 1916 model had chinstrap attachments on both sides. Of course, one should not assume that this headgear could protect a soldier from a direct bullet hit in the head or a fragment of a shell that exploded nearby.

Like any helmet, it only protected against head injuries when dugouts and shelters collapsed. The helmet was replaced in 1918 (Stahlhelm M18). On this helmet, the chinstrap holders were removed from the body and attached directly to the edge of the blanket.

M16 and M18 were used by Freikorps and Reichswehr. And both samples were included in the equipment of the early Wehrmacht with minor modifications. Modified sleeves of the 1931 model were installed on them, and in 1933/34 the national emblems were applied.

These helmets were also used during World War II. They were supplied to various auxiliary units police, anti-aircraft gunners, foreign formations serving in the Wehrmacht, etc. By the thirties of the last century, German M16 and M18 helmets were ineffective against improved ballistics. An experimental 1932 helmet was introduced and used in exercises during an extensive test period of 1932-34.

But he was not destined to be in the army in the German army. In accordance with the order HM 35, no. 289, the new helmet was the M35 helmet (Stahlhelm M35). It was made of high quality steel, retaining its basic traditional shape. But it was less massive, with a low silhouette and better safety performance for a fighter than the M16 or M18.

The total weight is reduced by 150 grams. The M35 weighed roughly 1,300 grams. In addition, the vents on both sides of the helmet were manufactured as a separate piece (rivet with a hole), in contrast to later helmets in which the vents were stamped. The shape of the M35 helmet is more oval (front to back) compared to the more rounded shape of the M40 and M42 helmets.

This slight difference is not noticeable until the M 35 helmet is aligned with the later models. The M35 had a standard 1931 model liner. The M35 helmet underwent minor changes in 1940. Simplification and lower costs became necessary for the increased needs of the army, which entered a major war. The production of M40 helmets was less technologically advanced than the production of the previous M35 model. For the M40, as well as for the M35, the rolled edges of the helmet base are characteristic.

This is why the M40 is often mistaken for an M35 helmet. The main difference between the two helmets is the air vent, which was stamped out without installing an additional piece (rivets with a hole). This method of production made it possible to reduce the number of operations required to make a helmet, which was an important factor in the efficiency of production in wartime. Due to the simplification of the helmet manufacturing process, the shape of the helmet underwent a slight change, which became more rounded than that of the M35.

In 1942, the German helmet was changed again. Here is a photo chronicle of the recruits being given their new steel helmets. The 1942 helmet is the most common of all German army helmets used during World War II. Their release was carried out from 1942 to 1945. The M 42 helmet was a simplified version of the M40.

A distinctive feature of this helmet is that the edge of the base of the helmet did not roll up, but remained sharp. This feature is dictated by the need to simplify and reduce the cost of the helmet manufacturing process.

The quality of the M42 helmets was definitely inferior to the M35 helmet. Helmets with protective effects superior to the M35 were tested in 1944, but never entered service. The item "WWI WW2 German steel Helmet M18.

Reichswehr, very rare RRR" is in sale since Saturday, March 13, 2021. This item is in the category "Collectibles\Militaria\WW II (1939-45)\Original Period Items\Germany\Hats & Helmets". The seller is "evgeniy_1972" and is located in Belgorod- dnestrovskiy. This item can be shipped worldwide.